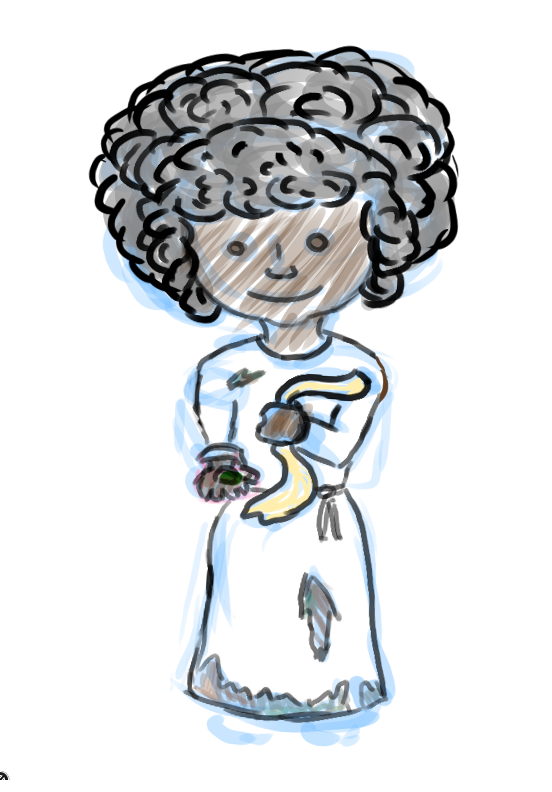 Maalira is called out by a man without magic to help deal with the aftermath of the Battle of Heroes. Session S3SA: 02.

The healer who went and caught Maalira is a follower of Arroin, the son of Chalana Arroy who gave away so much of himself that he can give no magic to his followers. “I’m going to deal with a couple of tricky cases and I could do with someone keeping the area pure,” he says. There is a little moment while he checks Maalira’s robe as if to be sure she knows the spell.

Maalira looks a trifle embarrassed. “I can do the spell, I just have’t had time yet,” she murmurs.

“Good. You’ve been working hard enough.” He is probably about forty, and by the look in his eyes he is tired of battle, yet here he is. “The worst has eased off, but the burials and burnings will start soon, and the rest of us…”1Maalira fails Insight (Human).

He trails off, as they reach a patient who needs a lot of sewing up and yes, purification. A gut wound. She is a Lunar, by the look of her, a big, solid woman with good quality padding and no other armour.

The healer makes no comment as the spell fails, just tells the Lunar, “You’re going to feel this, but it’ll stop the pain.”

Maalira shakes her hands and rolls her shoulders, then tries again.

The mess gets less messy. Together with some water from a jug that shimmers as it is poured, that cleans the wound enough that the man can start suturing. “I was at a battle once where we had to give several people onion soup,” he notes, like that means something. “Not enough of the Mother’s Mercy around to help.”

“Mm. I have known worse… I need more light in here.” He nods to a lantern with a curved wall of polished silver. “Hold that? Tell me about yourself. Keep me awake while we work.”

“Of course.” Maalira fetches the lantern. “About me… ahh, there isn’t much to tell. I lost my folks years ago and the White Ladies took me in.”

“Ah yes, I know the story, then. Physician to a noble?”

“Not exactly… I spent some time in the great hospital, and then one thing and another led me to travelling with Thane Varanis. I’m not her personal physician though.”2Special on Insight (Human) this time.

In the reflected silver light, with the Yelmalian gift of the sun from outside, he is easy to read – that was not what he meant. Varanis was not the person he was thinking about, although he recognises the name. He is puzzled now. “Easy,” he says to the Lunar warrior, who must either be a mistress of stoicism, or drugged to all-get-out, because she’s not weeping openly. “I thought we had some one else in there, but I’ve heard Varanis’ name. They call her Vareena in the songs.”

“That they do,” Maalira agrees. “There are… several others in the company who may also claim noble blood. I am privileged to travel with them.”

“Ah, right.” He does his work for a while, getting Maalira to keep the light for him.

Somewhere nearby a young child is crying.3Maalira passes Listen. The Arroin looks up a few times, once to observe, “There’s another guard on that door now,” and once to say, “I think this will need a little more cleaning…” when he is nearly finished.

Maalira performs the spell again. It comes a lot more easily this time.

Finally he sits back and tells his patient, “Well done. Someone will use magic for the next part, but that will keep you together. Next time, try not fighting.”

He gives her a smile that was once impish. “Up for more with me, or do you need to help someone else?” His words are a gentle admonishment for the time spent not out here, as well as an admission that she worked for hours before she took a break.

“I can keep going,” Maalira says immediately. “My- er- she- uh- the patient I was with when you found me will sleep for a considerable time yet.”

He gives her a glance, and his expression says he guesses, and he does not say more, although there is plenty more he could say. There is a moment when he picks up a towel to wipe his hands in which Maalira can look around the big tent.4Pass on Scan There’s a woman who looks a lot like Yamia asleep in a chair over there, although of course Yamia never wears armour. But the child tied to her and now grumbling a little looks a lot like Tamakt, too. They are next to a bed with a warrior in. Well, most of a warrior. He’s going to be sitting down a lot unless he can afford magic to heal that…

Maalira tilts her head towards the child, trying to catch his eye.

The boy looks the other way and sniffles.5GM rolls for Tamakt…

Maalira tries a different tack, and softly sings a few lines of a song she heard sung to children in Blue Tree.

… And the boy bursts into tears. That wakes the woman, who now definitely is Yamia, and who whispers something into his ear. It does not stop him crying, so Yamia starts untying the sling that keeps him on her. She looks like she is in pain, although she also looks like she does not want that to stop her.

Yamia too fails to hear her, although she does look around as if hearing something else.6Having fumbled Listen. With the boy mostly out of the sling, she leans back, turning him around and pulling out a little treat – a bit of bread with seeds – for him to suck on. The boy looks at her, and it, suspiciously, but is bribed into silence.

The healer asks, “One you know? Go check on them. I’ll be grabbing a radish.” That is, a bite to eat. Healer humour depends a lot on timing.

“My name is Sindnos,” he adds, and goes to where there is water for washing his hands.

She gives him a nod and a smile, and crosses the room and stops a little way away from the woman and child. “Yamia?” she says again.