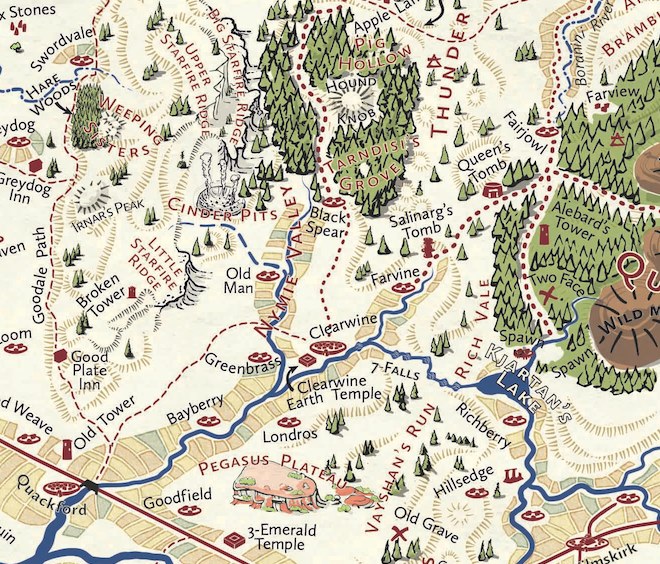 The following material belongs to Jeff Richard and Chaosium and was extracted with permission from Facebook. See the original post for full details. Text in blue has been added or modified and all the headings have been slightly adjusted.

One of the largest, oldest, and most powerful clans in Sartar, the Ernaldori are named after the Earth goddess, who is their patron and protector.

A clan of the Colymar Tribe. Their lands are in the Nymie Vale along the Stream, southwest of the Quivin Mountains.

The clan wyter is a sacred corn snake.

The Ernaldori clan is one of the larger Sartarite clans, with some 1,600 members. Of these, some 800 are free adults, mostly farmers, and 300 are semi-free tenants and laborers. There are approximately 60 free households.

Forty-four people are singled out in the clan to be of special significance, according to their social rank. They are:

*indicates member of Clan Council. An eighth member, *Clown, is not on this list.

The largest population center in the Nymie Vale is the town of Clearwine Fort, which has about 1000 adults. 550 of the adults living there are members the Ernaldori clan, making up half the clan’s population, including most of the clan leaders. There are 70 households within the town, including the household of the tribal ruler (which is far larger than most households) – however, the tribal ruler is not often a member of the clan.

The remaining clan members primarily live in households throughout the Nymie Vale, including the village of Greenbrass.

The Ernaldori are closely tied to the Clearwine Earth Temple, a major temple of the Ernalda cult. They also have a minor temple to Orlanth Thunderous, and six shrines to other deities – Asrelia, Babeester Gor, Flamal, Donandar, Gustbran, and Minlister – controlled by the clan. As a result, clan members have access to a very broad range of spirit magic spells, the full range of Ernalda Rune Magic, Orlanth Thunderous magic, and some Rune magic from several other cults. The clan’s magic is strongly oriented towards Earth and Fertility.

Numerous earth elementals of all size serve as temple associates, as does a nymph and a Snake Daughter. The temple has numerous guardians and magical artifacts such as the Mirror of Ernalda, an many minor magical items such as binding matrixes for earth elementals or spell matrixes.

The Clearwine Earth temple has great influence in the Colymar Tribes and in the tribes around Wilmskirk. Thousands of people look to the temple for fertility and harvest blessings, and all the Colymar clans are sworn to defend the temple.

The Ernaldori themselves have great influence within the Colymar Tribe and have particularly strong ties with the Anmangarn, Arnoring, Konthasos, Ormarth, and Taraling Clans, as well as with the Zethnoring Clan of the Locaem Tribe. They had close ties with the Sartar Dynasty prior to the Lunar Conquest.

The clan throws feasts and festivals at least once a season. These include athletic contests (particularly foot and chariot races, and fighting), eating, dancing, drinking, and music, and other social and cultural activities.

The clan tattoo is a stylised snake.